By using a creative technique for closing the donor site incision, we are able to create a dramatically improved and often imperceptible scar in the majority of cases. The technique essentially slides the lower ledge of the scalp incision under the upper layer of the incision to create a situation in which the hairs from the lower scalp layer grow directly through the scar. While a donor site scar cannot be avoided, this technique helps to camouflage it by allowing hair to grow in the middle of the scar. The depicted photos illustrate the traditional donor site closure technique and the new trichophytic closure technique. The same patient is in both photos. The photo on the top is the donor site closure that was used during the first hair transplant session and the photo on the bottom is the donor site used during the second session. Everything was done identically in both cases, except the second case was closed using the trichophytic closure technique. Notice that the hairs, which are growing in the scar, create a situation in which the scar is virtually undetectable in this case.

Here are some additional examples of strip donor site closures. When performed by an experienced surgeon, a good candidate for a donor strip harvest will reliably obtain an excellent cosmetic result. One of the techniques to maximize the scar appearance is the trichophytic donor closure. This closure repair which is described below results in hair growing through the scar. 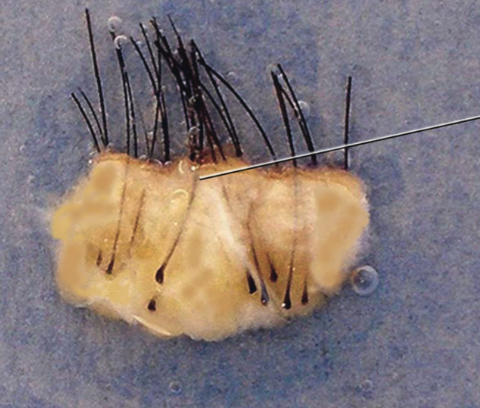 The first illustration shows that the donor hair strip has already been removed and the top layer of one of the skin edges is being removed with scissors. This effectively allows the hair bulb (i.e. root) to be positioned directly below the cut skin edge once stitches are placed to close the incision. The result is illustrated showing the hair growing directly through the scar. Proof that the technique works is also shown in the next photo. This is an actual photo of a freshly removed donor scar from a patients donor area, which was previously closed using the trichophytic technique during a prior hair transplant. The line actually points to the hair growing through the white scar itself.

Here are a few more examples of our typical donor scars. The first patient is a 38-year-old who underwent a strip harvest procedure for a 2000 graft transplant 6 years earlier. As you can see, there is already some thinning of the general donor hair and one can see through to the scalp. Yet, the donor strip scar is still imperceptible. A close up and very close up view is seen. Blue arrows point to the scar itself. 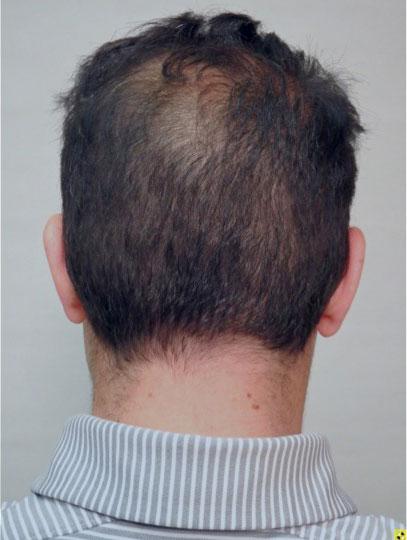 Another example shows a 68-year-old man 8 months following his hair transplant and strip donor harvest. Even though he has very low donor density and thin donor, the scar is very inconspicuous. Blue arrows point to the scar itself. 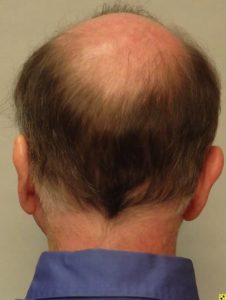 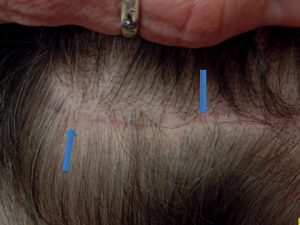 Unfortunately some ‘companies’ that advertise their FUE techniques in magazines (such as ARTAS and Neograft) display false and misleading photos of wide donor scars and describe them as typical. Portrayal of the scars in this manner is false because the donor areas they show in magazines are not typical of excellent work. Additionally, the photos of wide donor scars in these ads are very misleading because they unfairly scare patients away from this excellent option for donor harvest.

As an experienced practice, we also offer state of the art FUE hair transplants—this donor harvest option is an excellent choice for selected patients. This alternative method for donor harvest is always offered to patients as an option. We invite you to check out this portion of the site to learn more about FUE options.